Strategy:
You have animals and infantry at the point 1. Divide your forces on three groups. The first group is Martyrs and Pyromaniacs, the second is animals and the third is the remainder of infantry. The Group 3 send into the tunnel 2 and clear up the plateau 3 and neighbourhood (see hints). Then, your forces remove to the point 4. Be careful on the patrol of two Enforcers at the area 5. Group 3 send to the point 7 by tunnel 6. They can destroy vehicles of survivors from cliffs and go to the point 8. You can destroy enemy patrol from cliffs here. Go back to the point 4 and remove your forces to the tunnel 9. Destroy the Laser Destroyer at the point 10 by two Martyrs. Make passages through Barricades and divide the Group 3 on two teams. The first team send to the point 11 and the second to the point 10. Use a Pyromaniac as a bait for enemy forces in the valley 12. You can stepwise clear up this valley by firing from points 10 and 11 on dogging enemy units. After this, destroy the prison at the point 12. You liberate three Spirit Archers. Clear up the way to the Floater (point 13) and send Spirit Archers there. This is the end of mission.

Hints:
1. Avoid direct attacks - use firing from tunnels and cliffs.
2. Use a warrior as a bait for enemy - this warrior attracts enemy forces to the your group firing. 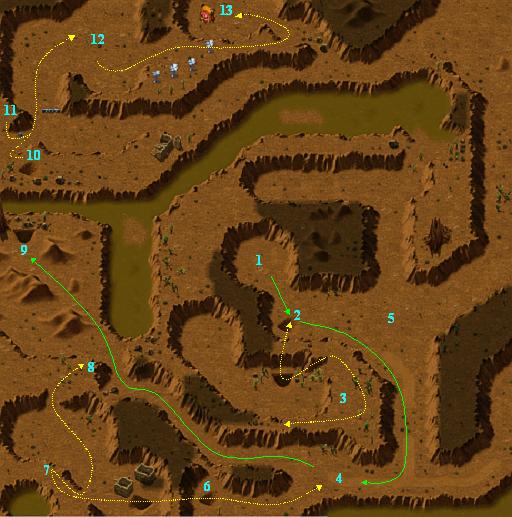