Strategy:
Your camp is set at the area 1. At first, you must occupy Survivor's Drill Rig at the point 2. It is defended by three towers. Your situation is complicated by Survivors in the forest and airdrops near your camp. Two Kneecappers in the entrance of the camp are good against these airdrops. Make six Rioters and Mobile Derrick. Take all your forces and destroy Survivor's towns at the area 2. Decoy their firing by your Bull Ant Tank. Then build up the Derrick there and send your Tanks with oil to the camp. Strike back attacks Survivors and robots simultaneously. The second task is the building of your camp at the area 2. Build up Warrior Halls along green line stepwise. You can gain resource units by unmaking of your unnecessary buildings. In this way, you can build up a new camp nearby your Derrick. Buid up towns in entrances. Make a group Rioters and send them to the point 3. Destroy Pod Cannon and Oilbot there. Then make the Fighter and send it to the point 4. You can destroy robot's camp there. Strengthen this attack by other Fighters and combine it with airdrop of Rioters. Clear up forest between points 3 and 4. After this, destroy Survivor's camp. 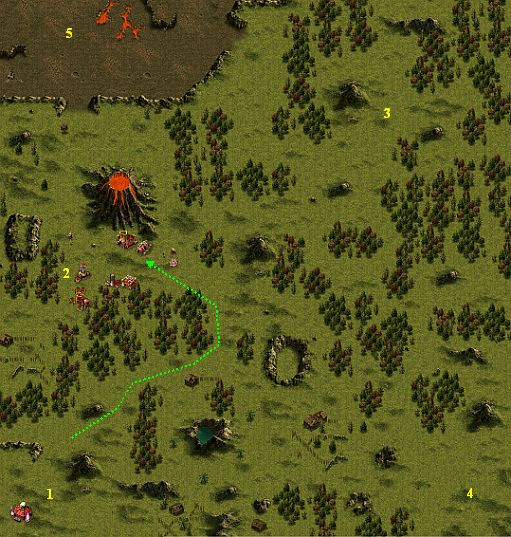