Strategy:
Your forces are set at the point 1. The enemy has two camps - at points 2 and 3. At first, destroy camp at the point 2 and build up your camp there. Two towers in the entrance of your camp are sufficient for defence. Destroy remaining enemy camp stepwise by airdrops. The best weapons are Michaelangelos. Discharge your Michaelangelos alongside of the target or move them behind various obstacles. You can decoy an enemy firing by another unit too - Oil Tankeroids are the most resistant. Strengthen your forces by Transport Domes. In the end, clean up the rest of the map. 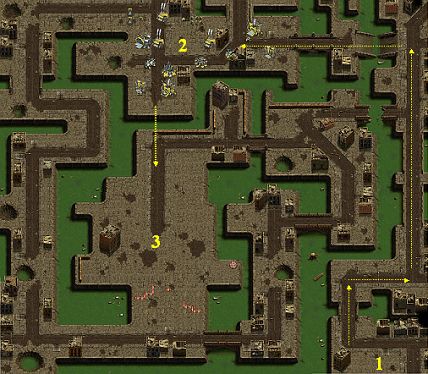