ISLANDS IN THE STREAM

Strategy:
Your base is on the island in the north part of the map (point 1). Dislocate your infantry and vehicles on cliffs and defend entrances. Main attacks come from North and West. Build up the complete base and strong power resources. Be prepared on air attacks. Destroy the Drill Rig and Power Station on North West of map (point 2) by Doom Dome. Transport a Grim Reaper at the point 3 and destroy Survivors on this island. The best weapon against towers are Fighters. Then you can occupy nearby island (point 4). Next action is destruction of survivors on the island 5. Doom Dome and Fighters can destroy Force Walls and Cannon Tower in the entrance of this island. Then, your Huge Artillery eliminates the Laser Destroyer. Dislocate three Huge Artilleries on south margin of captured island and destroy all in their range over water channel. Now, you must occupy the Survivor's base (point 6). Eliminate the Laser Destroyer on the west part of the base. Combine attacks by Fighters and the Huge Artillery from nearby island. Send landing forces to this place, destroy all and go to the center of Survivor's camp. Strengthen your attack and in the end, destroy whole camp. 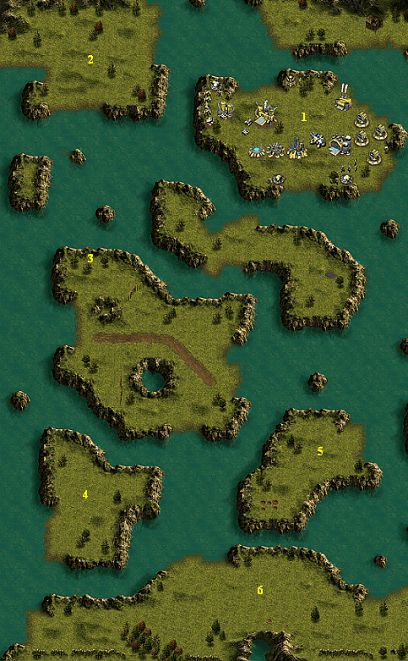