Strategy:
You have an incomplete camp at the point 1. Move your forces to the point 2 and defend the entrance of your camp from cliffs. Remove your Power Unit closest to the Oilbot and build up complete camp with strong resources. Prepare four Spore Missiles and send them on cliffs against Wasp Bombers. Then make a Grimm Reaper and Transport Dome. Send them along yellow route to the point 3 and destroy all towers on this route. Then, you can destroy Bull Ant Tanks there. Send another Grimm and Repair Vehicle as a support there. Find out weak points in the defence of Evolved's camp and exploit them. For example, you can destroy Bazooka Batteries from the point 4. Make eight fighters and attack on enemy camp. After this, you must clean up the rest of the map. Go over these areas by fighter. All rest enemy forces come to your camp and you can destroy them easily. 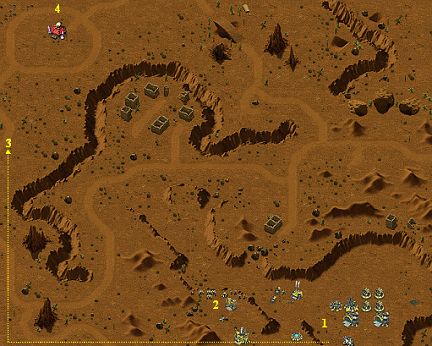