Strategy:
You have vehicles and infantry at the point 1. Send the combat vehicles and infantry to the beach. They defend the entrance in your territory. Then build up your camp. After this, send a Grim Reaper to the point 2 by air (closest to the east margin). This Reaper can destroy the most east Bazooka Battery (the triangle on the map) - you obtain free air corridor to the North. Send this Reaper to the point 4 and destroy all combat units, towers and Bull Ant Tanks there. After this, continue in destroying of whole camp. Meanwhile, send a Cauteriser to the point 5 by air. Destroy all infantrymen and Bull Ant Tanks there. Strengthen this attack by a Grim Reaper. Destroy all Bazooka Batteries and all enemy means without range of the Touches of Death (rhombuses on the map). Then your Fighters can destroy all enemy towers and all other means of this island camp. In the next step, send a Grim Reaper to the point 6 by air. Destroy enemy power resources and all towers there. Strengthen this attack and destroy the remainder of the last camp.

Notes:
1. Attack quickly - the enemy must not build new Touches of Death.
2. This mission is the same as the mission of Survivors "Death to the freaks".
3. The part time is 2:20 and my record is 1:17. 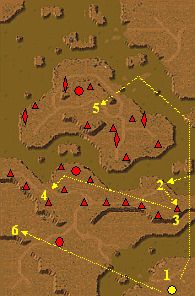