Strategy:
You have 3 Airlifters and incomplete camp at the point 1. Your Drill Rig is located at the point 2. Evolved have a Kneecapper at the point 3. You must drive your Tankeroids without its gunshot at the beginning. Upgrade your Barracks and make group of 5 Flamers. Send them along yellow trace by an Airlifter. Then decoy the Kneecapper by your Tankeroids. Now, your Flamers can destroy it. Crush all on plateau 3. Meanwhile, make a lot infantry - the best are Grenadiers. Locate some Grenadiers at points 4 - they decoy Series 9 to your camp 1 instead to your Drill Rig 2. Destroy their attack. Upgrade your Barracks and make Kamikazes. Meanwhile, send group of Flamers to the point 5 and destroy the Bazooka Battery there. Now, you have a free way to the camp of Evolved (point 6). Destroy all in this area. Two Grenadiers can destroy the Bull Ant Tank at the point 7 from cliffs. The camp of Evolved at the point 8 is without resources now. Next task is destroying of the camp of Series 9 at the point 9. Send Kamikazes along green trace by Airlifter. You can stepwise destroy enemy buildings there. Send 30 Grenadiers to the point 10 and destroy 3 Distance Seeders there. Then clear up entire area 9. The last tasks are to occupy islands 11 and 12. The best are airdrops of Kamikazes and Laser Troopers. 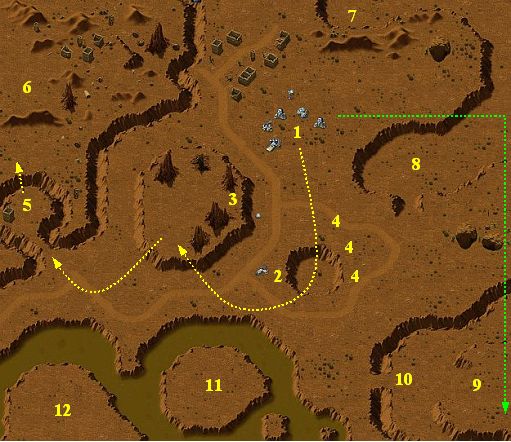