Strategy:
Your forces are located at the point 1. The enemy camp is on the plateau 2. Your allies have camps at the points 3 and 4. Move your forces to the area 5 and build up your camp there. You need not towers - your forces on cliffs are sufficient. Build up two Power Stations and produce two Airlifter sand two Juggernaughts. Send them to the point 6 near the enemy Power Plant. Destroy all mobile enemy defenders. Then destroy towers at the south entrance of enemy camp (see hint). Move forces from your camp to the enemy camp and destroy stepwise entire enemy base.

Hint:
Juggernaughts have a bigger gunshot than enemy towers. Exploit it. (The join between Juggernaught and tower must be horizontal or vertical line on the map.) 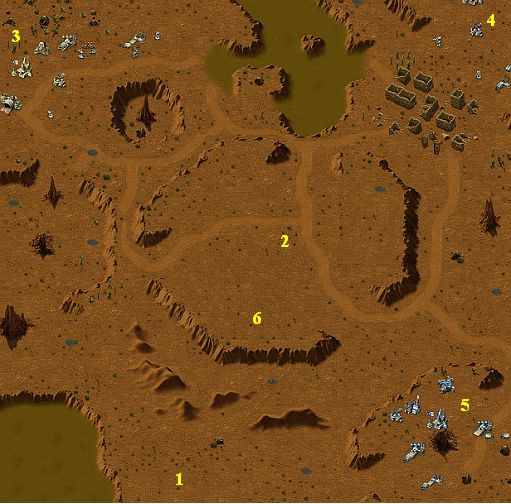